The draft has been held and the season will start
Tuesday Nite December 5th
(the rink was unavailable this week so enjoy your week off!)

NO GAMES this Sunday Nov. 26!
Enjoy the Thanksgiving Holidays!

Here's the games for this Sunday... 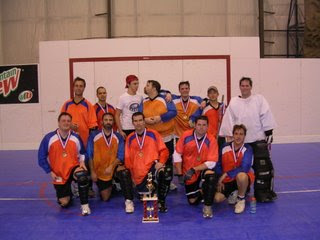 WOW! This whole Fall 2006 Tues. Nite league has been TIGHT and the FINALS was no exception!

With SECONDS to go BALLOON KNOT'S Michal Duchon deflected a Matt Leslie pointshot that APPEARED to go in but popped onto the BACK of BALLOON KNOT goalie Mike Vanous' net!

A few bad bounces were the difference in this game! N.E's Chris "Phenom" Haynes and Keith Kettel had some beauty breakaway goals while B.K.'s Garwood and Duchon had some incredible passes that lead to goals!

Many thanks to Mr. Cavalcante and Steve Locicero for reffing a great game as well!

Keep these MASHA players in your thoughts and prayers...

Tom "69" Gramling (HEADHUNTERS) and Chad "Captain Hook" Starman (BLADES and GIN & JEWS) both lost their fathers in the past few weeks and I'd like to ask you all to keep them in your thoughts and prayers during this very sad time for them. None of us are getting any younger but playing MASHA hockey just seems to make us all FEEL like we're kids again. But reality always rears it's ugly head when we least it expect it.

On a SOMEWHAT lighter note, Bob Merry (BLADES) is STILL alive and well and surviving in Iraq! Here's an email he sent this week....

marHaba (Hello),
Well I cannot even remember the last time I wrote a mass e-mail to everyone. I guess it is because there has not been much going on.
I am still at Abu Ghraib prison working with the Iraqi Army. I have only left the prison grounds twice since arriving here on August 26th.
Some people look at that and think how boring and I say to them…Yes!!
Boring means I am not on the roads traveling up and down IED Boulevard.

I refer to all roads in Iraq as IED Boulevard. Others say it must be scary having only 7 Americans at Abu G. and over 100 Iraqi Soldiers, I don’t even think about.We still receive Mortar fire on occasion, but I have already become used to it and do not get to worked up any more when I here the explosions.
We still receive small arms fire, but nobody has been hit yet so I just assume that whoever is firing at us is not a very good shot.

(Time for some Politics)
Recently the U.S. made some changes of who they wanted in power. Democrats won big and this appeared to prompt President Bush to ask Rumsfield to step down.
Now many Americans feel like this was a big blow to the President. I am not a historian, however I believe that over the last 50+ years that every President who has served 2 or more terms and his party also had control of the House and Senate has lost the House in Senate during the 2nd mid-tour election.

History has a way of repeating itself. I also wanted to let you know that Americans died the day before the election, the day of the election and the day after, nothing has changed.
Unless the Party for “GET THE SOLDIERS OUT OF IRAQ NOW” won nothing is truly going to change.

The Holidays are fast approaching and I want to wish everyone
a Happy Thanksgiving,

Take care and God Bless everyone,